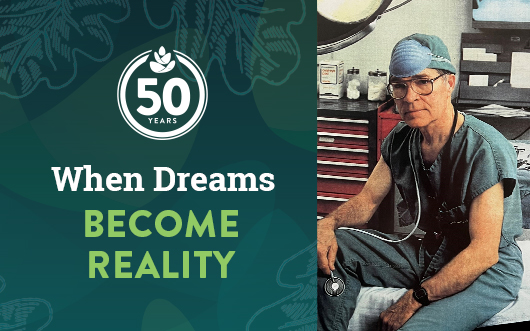 Travel back in time to the year 1972. Gerald Ford has just been sworn in as Vice President, the Dallas Cowboys won the Superbowl, The Godfather is a smashing success at the box office, and the St. Cloud Surgical Center has officially opened its doors for the first time.

When Dr. Joseph Belshe, an anesthesiologist from rural Minnesota, began his quest to establish an affordable surgery option in his community, he never imagined it would be what it is today. As the 1st outpatient surgical center in Minnesota and only the 2nd in the US, the odds were stacked against him, but he had the right people on his side, and it made all the difference.

In a recent interview with Dr. Belshe, who turned 100 years old in 2021, he told us the dream of St. Cloud Surgical Center was not one he had alone, but one he knew was possible. “The surgeons I worked with were searching for a less expensive and better way to do simple surgeries outside of the hospital. With modern anesthesia, I knew it was possible,” said Dr. Belshe.

From finding a facility and acquiring licensure from the State to convincing insurance companies to come on board, Dr. Belshe diligently followed his calling. As we celebrate the center’s 50th anniversary, Belshe continues to credit the “good people around him” for his success.